Just as a follow-up to an earlier post, here is a picture of the then Princess Elizabeth's sitting room at her home Clarence House (about 1950), in which hung on the wall the preliminary sketch for Sir James Gunn's "The Conversation Piece", featuring G.K. Chesterton and his friends Hilaire Belloc and Maurice Baring. It is located to the right of the fireplace.

As I mentioned in the earlier post, Princess Elizabeth had received it from Sir Jame Gunn as a wedding present in 1947, and as Joseph Pearce notes


The future Queen replied on 16 December to offer "our most sincere thanks for the delightful picture of Mr. Chesterton, Mr. Belloc and Mr. Maurice Baring...I think it perfectly charming, and much look forward to hanging it in my house."

As we see, apparently she did exactly that. :-) 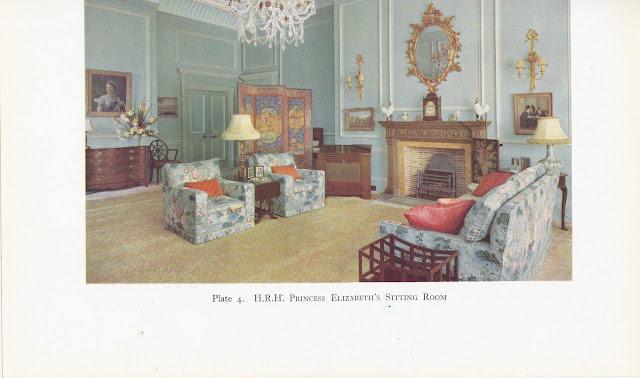 The picture, incidentally, is from the book Clarence House by Christopher Hussey (1950), from the plate opposite of p. 76. It is also the picture which appeared on the dust jacket (albeit the dust jacket of the edition I recieved was, naturally, not in as great of condition as the picture in the book itself, so I chose to use the latter).
Posted by Mike at 5/12/2018 05:21:00 PM

Labels: [References to Chesterton by others]